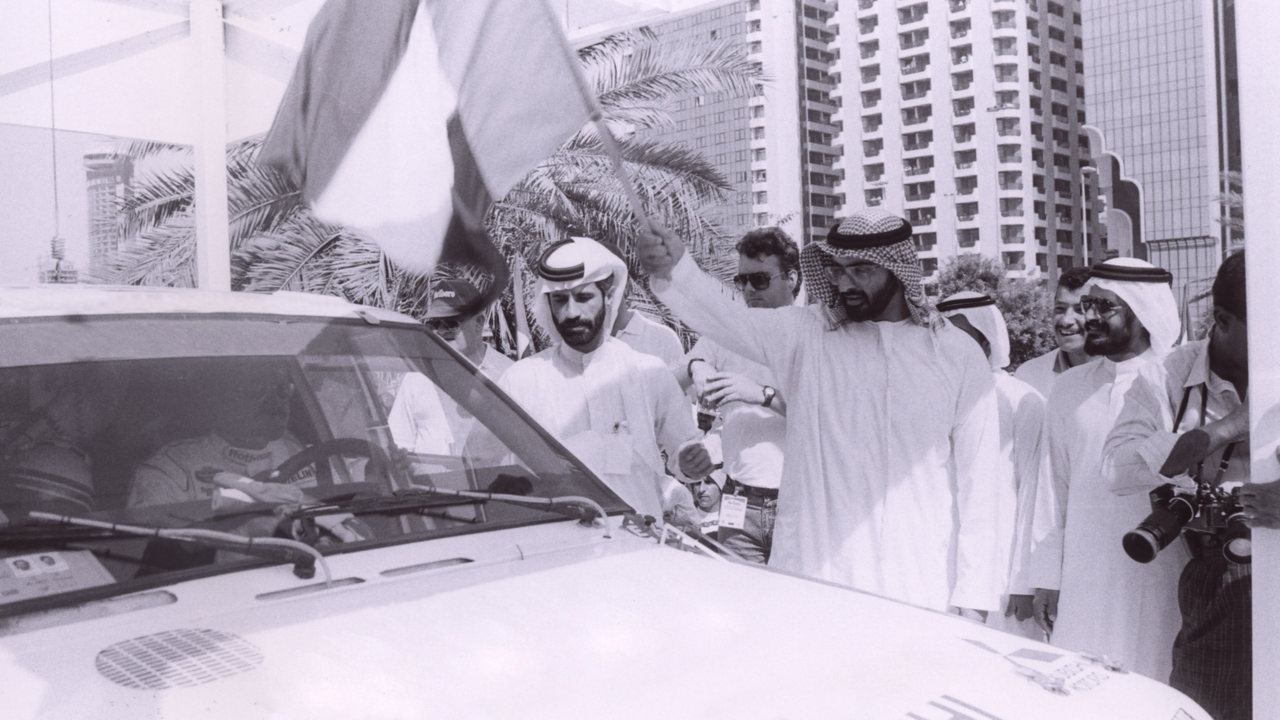 In the countdown to the 31st edition running from 5-10 March, rally founder Ben Sulayem said the event’s longevity is a tribute to the UAE’s vision to be a world-class venue for sustainable motor sport.

“That’s the bottom line behind the success of the Abu Dhabi Desert Challenge,” he said. “The UAE government has given enormous support and encouragement over the years, because the plan was always to take the event to the top level, and keep it there.”

“Without this commitment, the rally might have struggled to survive. With it, there’s a considerable legacy to build on, and the event can reach another level as part of the new World Rally-Raid Championship.”

It is part of rally history that, one lunchtime, Ben Sulayem jotted down his original plan to stage the event on the back of a napkin. He launched it in 1991, and took it into Abu Dhabi the following year with a short special stage close to the city’s airport – the first rally action ever seen in the UAE capital.

A black and white photograph from the archives of the Emirates Motorsports Organization (EMSO), the rally organisers, shows H.H.Sheikh Mohammed bin Zayed Al Nahyan, then the future Crown Prince of Abu Dhabi and Deputy Supreme Commander of the Armed Forces, flagging off the cars.

Now one of five elite events making up the new World Rally-Raid Championship, the Abu Dhabi Desert Challenge is entering an exciting new era, as FIA and FIM cross country rallying are unified in a single series for the first time.

“We’re indebted to all our strategic partners in Abu Dhabi and the Al Dhafra region for the crucial help and support they provide in so many ways towards the operation and running of this legendary rally,” said the EMSO.

“The Ministry of Defence build the bivouac, the rally’s family home for the week of the event. Municipality teams provide round the clock support, while Tadweer plays a key role in the delivery of a more environmentally sustainable event.”

Across four decades, the event has set the standard in FIA World Cup and FIM World Championship terms on its course into the inaugural World Rally-Raid series.

The benefits are felt by each of the world-class line-up of drivers and riders assembling at Abu Dhabi’s Yas Marina Circuit ahead of the official start on 6th March.

The rally roars away into the Al Dhafra region’s spectacular desert landscape, with five stages of 264km, 170km, 257km and 217km added to road sections of 519km for an overall length of 1,917km.

“That’s what makes them return, year after year,” said Ben Sulayem. “It’s what makes it such a special rally. A rally with a brilliant future.”